I did it. And I’m so glad it’s over. I usually go through a period of mourning after a race. Not this time. I have been enjoying life so much more now that it’s done. I really think I had forgotten how to for a while. 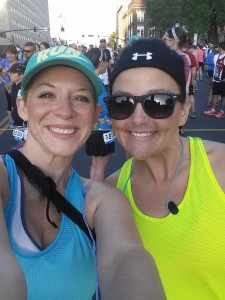 I have been training for a marathon since last summer. I signed up to run the Saint Jude Memphis Marathon with Team WillPower, a group based out of Monroe. The team raised over 40,000 dollars for Saint Jude before the race in December. We did morning runs during the week at 5:00 because of the heat but over the course of my training I started sleeping in and running solo a little later in the morning. It was during the summer so my husband was home with our son and I had plenty of time to run before work. By the time December came, I was ready to get the race over with. I was becoming more tired and sleeping in later so I was actually not running in the mornings until after I dropped my son at school. I would frequently go in to work with wet hair in a ponytail because I didn’t have time to dry it.

Through ice and wind my family and I drove to Memphis on December 5 only to find out the race was cancelled that night. I had the option of transferring my registration to another Saint Jude race. Some of the team decided to run in February in New Orleans, which I also planned to do. But when I got home and went for that first weekly run I knew my heart wasn’t in it. I thought it would be better if I took a break for a couple of weeks and signed up for Nashville in April.

A couple of weeks did not help with the level of tired I was experiencing. I was still sleeping in and running after school drop off, so I made a decision to cut my hair to save time. I cut it pixie short, so it would only take less than a minute to dry and I could be at work on time with dry hair. Anyone that has a family and has trained for a marathon knows that the hardest part is spending so much time away from everyone you love. Thankfully I have a supportive husband who would gladly hang out with our child every Saturday while I was gone for hours.

I asked my best friend Becky and her two sisters Jenny and Katie to come with me to Nashville and even talked Jenny into running the half with me. Nashville was so much cooler than we expected. The people were awesome and there are so many fabulous restaurants and great things to see in the downtown area. I tried not to get too worked up over the hills because I had run the Mississippi Blues Marathon in Jackson and those hills are much steeper. I made a resolution not to stress about the race at all because whether or not I freaked out, I would be participating and finishing it on Saturday. I figured I would be a little slower than usual and that was ok with me, as long as I finished. 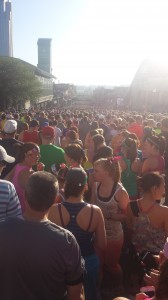 But standing in the massive crowd before the start line, I couldn’t help but notice the amount of half marathoners as opposed to people who were running the whole thing. The runners who were participating in the half were wearing blue numbers, while the marathoners were wearing orange. In a sea of blue, I only saw a few oranges, peppered here and there. I started to feel a little uneasy like maybe all the people running the full were in a different corral and were all mostly fast. Or even scarier than that, I wondered if the majority of the runners knew something I didn’t know. I was prepared for the heat. Tennessee heat doesn’t have anything on Louisiana. I was “prepared” for the hills. I had run Jackson without training on hills so surely I could handle Nashville.

As it turns out the heat didn’t get me. But the drier-than-I’m-used-to climate did. It was getting tough to breathe before I reached the halfway mark. And those hills… the thing is, you have to force yourself up them like any hill. And though not many of them are super steep, any incline takes more effort. But I expected to be able to let loose and sail down them and that didn’t happen. They aren’t steep enough for that. They actually take a good bit of effort to run down.

The part I dreaded the most was the split from the half marathoners. I feared I would be one of few left to finish after we took our detour. And suddenly I went from running with a massive crowd to having several feet between me and anyone else. At the halfway mark I came to a realization that every runner in my vicinity looked like they were just as defeated as me. And for the most part, lots of us all hovered around each other ‘til the end.

I noticed that other people were walking a good bit too. I wondered if they couldn’t breathe either. I kept trying, but every time I ran for 15 seconds or more, it felt like my windpipe was being crushed. This has happened to me before but it is usually at the end of a race. Walking is hard on my body. It hurts by lower back and parts of my legs. But walking was more acceptable to me than not being able to breathe. I would continue to try to run for at least 5 miles but the same thing happened every time.

I tried thinking of several mantras. I started saying, “You trained twice for this.” “You cut off all your hair for this.” “You spent so much time away from your kid for this.” And then finally one clicked. I admitted to myself, “This is the worst I’ve ever felt. This is the worst it’s ever been.” And I immediately felt better. And I gave myself permission to walk. Bad runs and bad races are a necessity. I just had to accept that I had a great first marathon and my second was going to be horrible. I hope it’s the worst I will ever have but who knows. I do know that if it would have been my first it would have probably been my last.

When I finally reached the finish my girls were there. Katie made me cry immediately like always. I was so proud of Jenny and felt a tad bit guilty about convincing her to run one of the most challenging courses for her first half. And I found out that due to a fiasco with Becky’s purse everyone had ended up logging more miles than they ever have that day. Katie walked at least 3 miles and Becky walked much, much more. That night we went out like we were in our twenties and had a well deserved blast. 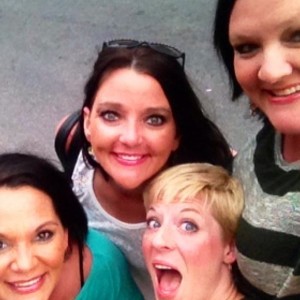 I found out later that 29,201 registered to run. 24,087 participated in the race. 23,807 finished. And though I can’t find an actual number of people who ran the full, I did see that less than 4,000 ran the marathon. So yes, I think they may have known something that I didn’t know.