Home » Features » If You Build It, the Bass Will Come

If You Build It, the Bass Will Come 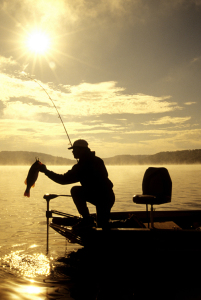 article by Kenny Covington
I have always been one to tinker with lures.  Rarely have I ever bought a lure and not tried to change it, in some fashion, in order to make it “better.”   I think it is a natural instinct in fisherman to attempt improvements, even on things that may work just fine to begin with. However, sometimes while trying to make these improvements it can lead the individual to believe…“I can build one that is just as good.”

Many years ago my dad and a few of his friends used to pour their own spinnerbait and jig heads.  This was done, not from a money saving idea, because they had found out that some of their tournament competitors were doing so.  Back then the logic was the better fishermen had “secret” baits that couldn’t be purchased and so the emphasis was placed on creating newer, improved, yet secret, lures.  I can remember hearing a gentleman who won a particular tournament telling his awed competitors that it wouldn’t do any good to tell them how he caught his fish, “You can’t buy what I caught them on, so I have to make my own.”  To this day, I can still see the defeated looks on the fishermen’s faces.  If you couldn’t make your own, then you couldn’t compete.

Fast forward 30 years. My dad has since passed, as well as most of the fishermen I knew growing up that he competed against.  I still have the melting pot and the molds my dad used to pour his own jig heads.  While the aura of the “secret” lure has diminished somewhat, building our own lures has taken on a new interest for different reasons.

In a time where people are looking to find more inexpensive ways of doing things, it is no surprise that even in the sport of bass fishing people are becoming more conscious of saving a few dollars.  A few years ago, I had found a particular jig and jig color that was very successful for me on our local waters.  I was fortunate to win quite a bit of money on this one lure, but the problem was they were hard to locate for purchase.

One evening while contemplating my short supply of jigs and my purchasing plight, the idea of making my own jig to keep from having to buy it hit me like a lightning bolt.  The very same evening I happened across a video where professional angler Gary Klein was discussing the process in building his own lures.  I watched as he demonstrated how easy it is, while he discussed the different components involved in each process.  His video introduced me to Fishboss.com and Fishingskirts.com, two websites built and designed for the angler, both tournament and recreational, interested in building their own lures.

Everything you will need to create your own lures can be found on these two sites.  If you wish to build your own spinnerbaits, buzzbaits or jigs, there are an endless variety of components that are available as well as the tools needed to help you with the process.  There are thousands of different skirt combinations that are also available to anyone who is interested in bait building.  With a little imagination and a bit of time, the possibilities are endless when it comes to creating your own lures at half the cost it takes to buy them from a tackle store.

The jig which I was originally spending up to five dollars to buy, can now be make for less than a couple of dollars per lure.  While they can’t be made at quite the lower price of a jig, the same can be said about spinnerbaits and buzzbaits.  A lure that will cost you six dollars in a tackle store can be produced with a little time and effort for close to half the store price.  The best part of it all?  You are producing tournament quality lures that won’t break your bank account, plus you will have your fishing buddies wondering why you are successful and what you are using.

Fishboss.com and Fishingskirts.com sites also include several how to videos and the online store accessibility is quite easy.  On those days when you can’t be in the deer stand or on the water, not only is bait building a great way to spend an afternoon, it is also a way to get your son or daughter interested in this great sport.

For years, serious white perch fishermen have tied and colored their own jigs.   So this is not just a “bass fishermen’s only” idea.  There is just something extra special about building a lure and catching fish on the very lure you created.  It is one of fishing’s greatest pleasures.

Remember to be careful in the woods and on the water and catch one for me.  See you next month!