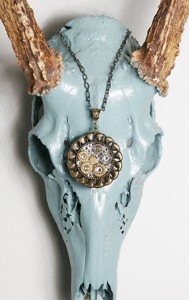 Camouflage print clothing, weapons and ammo can be a large part of an outdoor sportsman’s identity. These are telltale signs of someone who is proud of their firearms and the hobbies — or way of life — they are used for. This is all well and good, until hunters and gun owners have to dress up and attend a formal event, like a wedding for example. Depending on the bride (or “bridezilla,” in some cases), it may be seen as rude to come to the ceremony openly packing heat or wearing camo attire, and usually this means they are left behind in the deer stand or duck blind. “

Karan and Rick Kirkham founded Bullet Designs in 2010, and they specialize in making accessories that make it possible to take a little bit of the outdoors with you in your daily life and to any event. Bullet Designs makes everything from earrings to cuff links to fan pulls, and all incorporate bullets of varying calibers, makes and models.  (Karan Kirkham added that the bullet cufflinks even make a great gift for the groomsmen.)

Bullet Designs is based in Choudrant and has experienced amazing growth in the past four years of operation. The company went from a small operation to a full staff of 10 people — complete with marketing, accounting, customer service, jewelry assemblers and head “bullet cutter.”

Karan Kirkham said that Bullet Designs began as a side project for her and her husband. Before Bullet Designs became their full-time career, the Kirkhams owned an auto repair shop and Karan did taxes, but they learned how to make items to sell online during slower seasons of the year to supplement their income. Karan and Rick both have entrepreneurial spirits and tried many different things — including selling coupons on eBay to “extreme couponers”— before striking gold with their idea to fuse recycled bullets and accessories.

“My husband and I started selling things online in our spare time,” Karan Kirkham said. “He made bullet key rings, and I had learned to make some jewelry — starting out with guitar pick jewelry. I learned how to make jewelry online and did video tutorials.”

The Kirkhams began selling their products online in 2007, but Bullet Designs did not officially organize until 2010. Karan said Rick has the mind of an engineer, and while it took many rounds and months of trial and error to get it right, he was able to modify machines to be able to cut recycled bullets quickly and easily.

Bullet Designs uses spent cases and cuts them so down to the round bottom, leaving only the brand and caliber engraving visible. The bullets are then added to jewelry, accessories, key rings or used as ink pens or fan pulls.

Another aspect of the jewelry and accessory line that took trial and error was reaching their target demographic. At first, they believed their products would speak to men, so they began attending gun shows to sell them but found that their products were more successful at other shows.

“(The gun shows were) okay, but it didn’t really take off until we went to our first craft show,” Karan Kirkham said. “That’s when we found that women were our target audience.”

Karan Kirkham was also surprised to discover that it was not just hunters and Southern women that bought Bullet Designs products. She said that the bullet jewelry and accessories appeal to any women looking for original and unique products, regardless of whether they are gun enthusiasts. Every item is handmade, and it takes between 15 and 30 minutes to assemble each piece.

Ironically, even the anti-gun crowd can’t take issue with Bullet Designs, since they take bullets out of circulation that could be refilled and reused as ammo. The company prides itself on being “green” as well, so they also appeal to those who care about the environment.

“It could be somebody that doesn’t have any interest in guns. These are different, and nobody else has them,” Kirkham said. “And that appeals to a lot of women. It’s not something that everybody has… And of course, if you’re a man and you have to wear cufflinks, you’re going to prefer to wear one from a gun if you are a gun enthusiast.”

Once they pinpointed their target demographic and created products with them in mind, Bullet Designs’ sales took off. The success of the company caught the eye of firearm manufacturer Remington. Bullet Designs partnered with Remington about 3 years ago to produce items for the company to resell to their customers. Karan said this partnership allowed the Kirkhams to shut down their other businesses and focus on Bullet Designs full-time.

It also helped Bullet Designs grow even more as a business and branch out to new customers. At the time this article was written, Bullet Designs had 89,703 “likes” on Facebook, and it’s safe to say the company has graduated to a larger market than just within Northeast Louisiana. They currently ship products all over the country, and according to Karan Kirkham, Bullet Designs actually sells more products to people in other regions of the U.S. than it sells locally.

“You’d be surprised! A lot of people have thought that our market would be a Southern thing, but it’s not,” Kirkham said. “We ship to New York City regularly. And then Chicago and California. We have a picture of a gentleman who wore his (Bullet Designs) cufflinks in the Boston Harvard Club for his wedding.”

Not only does Bullet Designs sell products all over the country, they actually ship a large portion of their products overseas and to our neighbors to the north.

“It’s actually a global market,” Kirkham said. “I was looking earlier at a few of the countries we have shipped to, and we have wholesalers in Germany, Australia and New Zealand. Then, we ship to Canada probably on a daily basis. Some of the other interesting countries lately were Russia, Japan, China, United Kingdom and Brazil.”

Even though business is good, Bullet Designs has encountered issues the Kirkhams didn’t anticipate when they started production in 2007.

“When we first started, it was really easy to find what we needed,” Kirkham said. “But when the political climate changed a few years ago, it became harder and harder. So we’ve had to get a little bit creative there too, because we can’t always find what we need so we’ve bought other equipment to modify the bullets somewhat when we have to.”

Thanks to the Bullet Designs team’s creativity and ability to adapt under the new circumstances, they have persevered and gained the attention of some high profile entities. The company was awarded the 2014 Louisiana Small Business Innovative Award in Baton Rouge earlier this year and recently entered into a partnership with major gun manufacturer, Winchester. According to Karan, Winchester is taking Bullet Designs’ products to shows and adding them to the company’s licensed products on its website winchestergear.com.

Through all the success, growth and the promising future of Bullet Designs, the Kirkhams have never lost sight of what’s important. No. 1 on Bullet Designs’ “Our Core Values” list on their website is “Put God first in all that we do,” and the Kirkhams abide by this and have stayed humble. They are thankful for what they have and are grateful for the opportunity to combine their interests and to have created a unique, popular product. Karan Kirkham said she is blown away by how her life has changed in the last few years.

“It’s hard to describe; it’s just so much better,” Kirkham said. “We’re both so happy. This is our thing. I worked for other people and for other companies. We learned a lot, and it helped get us to where we are today. But we were never truly happy doing that. We’re true entrepreneurs, and it’s in our blood. This is where we are happy.”