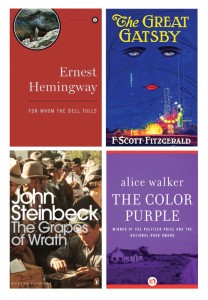 Sitting at a dinner party, you hear two friends discussing characters and events that sound familiar, and you start to play closer attention. They’re talking about a book, a classic that maybe you were supposed to have read when you were in high school. But you didn’t. Consigned to silence, you think to yourself, “This sounds like a good story. I wish I had read it.” Who hasn’t been there, right? With Summer just around the corner, now is as good a time as any to knock the dust off of Hemingway and Fitzgerald, snuggle up with Mr. Steinbeck, or get to know Nabokov and Walker. Here are fourmasterpieces of 20th Century literature that every serious reader should read.

For Whom the Bell Tolls
Ernest Hemingway
When it comes to American literature, no author stands taller in the nation’s consciousness than Hemingway, who towers over the 20th Century a literary colossus. Hemingway won the Nobel Prize for Literature in 1954 for his body of short stories, nonfiction and novels, including The Old Man and the Sea. But many critics agree that Hemingway reached his pinnacle with For Whom the Bell Tolls, his 1940 novel about the Spanish Revolution.

In the book, Robert Jordan is an American professor of Spanish who also happens to be an explosives expert, skilled with the demolition of bridges and tunnels. When a communist leader instructs Jordan to travel behind enemy lines to destroy several critical bridges, Jordan falls into a guerilla camp of revolutionaries and meets a woman. Jordan is a true believer of the revolutionaries’ cause, but his compatriots in the camp are anything but, and the leader, Pablo, refuses the mission. Jordan convinces the rebel camp to aid him in the bridge attack, but it’s too late and the group is ambushed, placing Jordan into a precarious and ultimately life-threatening decision.

For Whom the Bell Tolls is a gripping, gut-wrenching war story that betrays the realities of warfare, the danger of loyalty and the price of civil wars. In frequent poetic flourishes, Hemingway paints scenes that transport the reader from the comfort of their home to the stark, battle-ravaged forests of Spain at the height of Franco’s revolution. This masterpiece is a must-read for anyone interested in warfare or good literature.

The Great Gatsby
F. Scott Fitzgerald
If the recent Baz Lurhmann flick caught your eye and set your toes tapping, you’re in for a real treat with the F. Scott Fitzgerald masterpiece The Great Gatsby. Fitzgerald captures the zeitgeist of the Roaring Twenties in this novel, which he published at the height of the Jazz Age in 1925. In the book, the author tackles lives of excess, greed and covetousness while presenting readers with a love story that defined a generation.

Jay Gatsby is a mysterious, wealthy benefactor in Long Island’s “less fashionable” West Egg, a fictional village in which the young, rich and powerful flaunt their wealth and display a wanton disregard for Prohibition. But Jay’s ulterior motives are the stuff of legend. He hopes to woo his long-lost love, Daisy Buchanan, who is married to Tom, a socialite who lives in the more fashionable—and aristocratically connected—East Egg, across the water. Chaos ensues when Daisy, torn between Jay and Tom, confides in her cousin, the book’s narrator Nick Carraway. Will Daisy choose Jay and flee to a life of love? Or will she choose Tom and set into motion a series of events that will lead, inexorably, to tragedy?

Many readers slogged through The Great Gatsby‘s hundred or so pages over summer reading in high school. But for the adult reader, Fitzgerald presents a cautionary tale about the dangers of pursuing lost youth, of love and of loose morals. It’s easy to see in a close reading the parallels between Fitzgerald’s Roaring Twenties and today’s rampant consumer culture. Revisit this masterpiece, and you’re sure to come away with a different view of the world today.

The Grapes of Wrath
John Steinbeck
In the waning days of the Great Depression, John Steinbeck presented readers with a realistic, harsh look at the reality of life in the Dust Bowl. The Grapes of Wrath earned Steinbeck a National Book Award, the Pulitzer Prize, and was cited as an example of why Steinbeck received the Nobel Prize in Literature in 1962, almost thirty years after the book first appeared.

The Joad family has fallen on hard times. Tenant farmers from Oklahoma, they load up the family wagon and head West, with the hopes of finding success or escape from a crippling drought in California. Tom, the protagonist, has just earned parole from prison, where he was serving time for murder, and he arrives at the family homestead to find it deserted. He and his traveling companion follow the great Route 66 overland road to find his family, though doing so risks breaking parole if he leaves Oklahoma. Tom departs anyway and, ultimately, recognizes the futility of the family’s efforts. Tom goes on the run, pledging to become a fearless advocate of the downtrodden, the mistreated and the oppressed.

With three quarters of the nation currently experiencing a major drought event, and coming on the heels of a major economic downturn, The Grapes of Wrath presents contemporary readers with a stunning picture of a world turned upside down by the one-two punch of a faltering economic and manmade ecological disaster. With his novel, Steinbeck cemented himself as one of the masters of the naturalist school of literature and secured a place in the nation’s canon of great works.

The Color Purple
Alice Walker
Unless you lived under a rock in 1985, you heard of the film adaptation of Alice Walker’s epic novel The Color Purple. If the film is your only exposure, to this monumental book, chronicles the lives of African-American women in the South of the 1930s, a time when the idea of Civil Rights was a distant dream, is a great choice for summer reading.

Celie is a poor, ignorant girl of just 14 living with an abusive man she believes is her father. She is married off to a man identified in the book only as Mr. ___. Celie’s sister, Nettie, also flees Alphonso’s house, but Celie’s home with Mr. ___ offers little in the way of protection, and Celie sends Nettie to live with a wealthy black woman in town. Over the course of years, Celie recounts the lives of herself, Nettie, Sophia and Corrine, four women who decide, ultimately, that their lives are what they make them—not what some man gives them.

Told from Celie’s perspective in a series of letters addressed to God, The Color Purple earned Alice Walker a National Book Award and the Pulitzer Prize. The film version was nominated for eleven Academy Awards, though it failed to win a single Oscar. Fifteen years later, a musical version of the story took Broadway by storm, where it was nominated for an ironic 11 Tonys, and the play won all 11 awards.