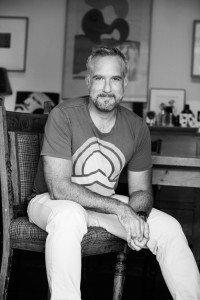 Family, Talent and the Kennedy Mystique

John and Doug Kennedy stood over the table, lifted the frame of the silk screen press, and waited for the print to set. It was 1989, and neither of them quite knew what to expect. At the very least, John is pretty sure today that they weren’t planning on creating a brand with a global reach. That changed a couple of years later, a couple of thousand miles away when a young man decided to wear a Mojo tee shirt to work.

At the time, few people in Louisiana had even heard of the young man. But they would. He was Jason Priestly and “work” for him was a little television program called “Beverly Hills 90210.” Overnight, it seemed, the Mojo brand sprang into the collective conscious. “That was in the early 90s,” John told BayouLife Magazine of the early fame. Suddenly, people everywhere were taking note of the funky boutique with the funny name. People were excited about Mojo. “I remember that got us very excited, as well.”

Finding a tee-shirt made in West Monroe on a nationally-televised broadcast was a major event. More would follow, as Mojo creations popped up elsewhere on television–on “Buffy the Vampire Slayer” for instance—and in feature films. One of the bad kids in Jack Frost is wearing a Mojo tee. So is Scott Evil in Austin Powers. It was an auspicious transformation for the little art gallery Carole Kennedy had started back in 1988. John’s sister, Kim Kennedy Bryan, still operates the shop in its original Trenton Street location.

“It actually was an art gallery first,” Kim said. “Then, my mother and I went to some trade shows where John and Doug were showing some Mojoware.” They purchased a few pieces of jewelry, a trial run for expanding Carole Kennedy’s gallery offerings. Quickly, the jewelry sold out. So, they bought more and expanded the offerings. It seemed with each visit to a different trade show, the Kennedys added another line. Customers, too, were getting excited.

“Customers would  actually suggest items. ‘What about hats? What about clothing?’” Kim recalled. So the Kennedys responded by adding tee shirts, accessories, candles, fragrances and whatever else their growing customer base demanded. “It’s literally a store that customers built.”

Now, more than 25 years later, that first tee-shirt has evolved into a thriving business, and Mojo’s Boutique attracts more fashion forward trendsetters to Trenton Street than ever before. A lot has changed over the years, as the family lost Carole and their brother Glenn to illness. But one thing has remained constant: the art. “It was a boutique that featured her artwork, the art of my brother, Glenn, and my brother Doug. Even today, you’re going to find original artwork,” Kim said. The art is just one aspect that has helped Mojo stand out. That art has inspired many of the designs that helped make the tee-shirt brand a global phenomenon. And global is by no means an exaggeration.

John recalls the moment he knew Mojo was truly a global brand. He and Doug had traveled to the Magic Men’s Wear Show, a major market for menswear held annually in Las Vegas. One year, they received the kind of polite attention one expects at a market show. People bought their product, but demand was hardly overwhelming. The next show marked a remarkable shift for the brand. “That was when the Japanese really took hold, when we went to the Magic Menswear show in Las Vegas,” John said. “One show was a basic show, nothing special. At the very next show, there were oceans of Japanese buyers showing up and buying our shirts.”

Mojo’s distinctly artful style has become something of an obsession for fans of the look.  The shirts that brought life to the boutique have given the brand an edgy, eccentric identity that is uniquely Southern in flavor.  In the hands of John Kennedy, Doug’s designs are now the cornerstone for a flourishing business that seems to know no bounds.

Mojo’s Boutique now offers much more than the shirts that it began with.  On trend, contemporary apparel lines the walls; fresh, sophisticated accessories are offered; intriguing home goods fill the shelves; divinely inspired personal fragrances are displayed; and the mercurial, hand crafted shirts with an unmistakable local flavor are impossible to ignore. While John has proven himself to be masterful at creating the Mojo brand that is not only popular locally, but also internationally, he is quick to give his siblings credit for their roles in the business.  Together, the Kennedys have established the unique identity that Mojo is known for.   Each of the siblings has their own area of expertise when it comes to making the brand a success, but it is the collaboration of their talents that gives them a creative edge.

“One thing that is different about us, is that Mojo is a collaborative effort,” John said. “ We have a collection of ideas and each give our input.  We talk about ideas together and look at the finished products together. ”
he result of this collaborative effort is a style that is distinctly Mojo.  Doug’s locally influenced designs are now featured on more than the shirts that got them their start.  John and Kim have expanded the creations to include items for the home, such as tote bags and pillows.  The designs have a mystical, vintage feel, and this style comes innately for the artist.  Their hometown of Monroe and native region have had a direct influence on their style, and this translates easily into Doug’s designs.   The result is an artful look that resonates with locals and has garnered attention much farther away from home.  Doug explains that the style Mojo is known for comes from the childhood roots the siblings share. This helps create a mystique around Mojo and drives season after season of remarkable prints.

“It’s something of a collective consciousness that people (of our area) have,” Doug said. “You’ll see pulses of our personal history throughout the collections, (in t-shirt designs) like the Tonga Lounge, Twin City Queen, …our schools have been every influential on us.  We are focused locally, and people respond to that.  Elsewhere, people respond to the feel and vibe of this area.  They respond to that mysterious quality of Louisiana.”

Their love of the mysterious, magical side of Louisiana shines through in all aspects.  From the shadowy bayou scenes to the local characters that would seem completely out of place in any other part of the country, these characteristics are interpreted into the designs with a wink to locals.

“It’s a compellation of our experiences growing up here,” said John.  “We love to incorporate things that are meaningful to us, and this area is especially important.  There is such a wealth of creativity here.”

The artistic endeavors go far beyond the quixotic and detailed images on original Mojo apparel that locals can’t get enough of.  Within the last few years, John and Doug have expanded their line to include fragrances that were specifically created for Mojo by master perfumers from Paris who were so inspired by the project that they traveled to John Kennedy’s home in Calhoun to experience the natural beauty of our area.  Mojo Magique debuted to rave reviews in 2013.  The unisex fragrance offers a subtle infusion of notes that were specifically inspired by our area, such as cedarwood, sandalwood, jasmin, lavender, cinnamon and mandarin.

Magique was such a success that it led the Kennedys to create two more fragrances—Voodoo Child and Belle, fragrances that evoke the sensuality and decadent qualities that are often associated with the South.  The Kennedys had the opportunity to work with international perfumer Jean Marc Chaillan, the nose behind the highly successful fragrances of Carolina Herrera, Burberry, Calvin Klein and Vera Wang among others.  Belle is a feminine fragrance, which brings forth notes of gardenia, rose, moss and patchouli.  Voodoo Child is another unisex fragrance, and the most complex and exotic of the line.  It opens with notes of pink pepper to reveal scents of orange flower from Africa, rose oil from Turkey and hints of leather.

Over the fall, John hosted perfumer New York-based Helen Murphy. For Helen, the experience was transformative, according to John. “She was inspired,” John said. “She said, ‘I now get the whole Louisiana thing.'” The result of that extended stay at John’s Calhoun home, of walks in the woods and listening to the sounds of a southern night, were a selection of possibilities for the 2015 line. In one short month, Helen had fallen in love with Louisiana. “She came up with a roster of fragrances for us to start working on. They’re just unbelievable.”

John expects to launch the first of two new fragrance offerings in February. A second new offering will join the Mojo brand in June or July. The line of perfumes are known as “niche fragrances,” which are made in small batches for specific tastes.  The individuality and depth of each fragrance is alluring and unforgettable. John said every aspect of creating the perfumes has been a fascinating experience for the Kennedys, from designing the stunning packaging to the striking label, which is visible from the outside, as well as from within.

“What’s interesting is that some of the senses translate differently to individuals,” John said. “Taste, eyes perceive things differently.  The blue and orange you see may be different than what I see…but scent is the same to each of us.  The market is referring to the line as ‘the South’s only fine fragrance.’”

Fragrances are not the end of the road for the Mojo brand, either. In the near future, the Kennedys plan to unveil a line of handbags that also have a local inspiration.  The bags, made from local alligator skins and leather, have been designed with the attention to detail and quality that Mojo is known for.

“We love to use local resources in our own work and watch them compete with the best in the world,” said John. The luxurious bags are created by the same craftsmen who produce high end handbags for brands like Coach and Chloe. The release date for the bags has not been determined, but the current designs promise to be extraordinary. Kim, who divides her time between Mojo and her own successful career as an author of young adult and children’s fiction, feels that the boutique provides a special aspect to the region.  “I like to think of Mojo’s Boutique as a Louisiana shopping retreat, because it truly embodies a Louisiana sensibility,” Kim said.  “From contemporary fashions and accessories with a Southern edge to handcrafted and printed pillows depicting a dreamy bayou landscape, the store reflects our love for the area.”

As the new tee-shirt designs debut in the coming months, there will be more fresh and exciting merchandise to explore at the boutique.

“This fall and holiday season, customers will enjoy our expanded offerings of jewelry, gifts and handbags, including the introduction of our original leather and locally sourced alligator goods,” Kim said. “ In addition to many new clothing lines, customers can look forward to new bath and body products, European cashmere scarves and exclusive objects for the home.”  Despite the international success of their original designs and the popularity of their line of fragrances, Mojo maintains the same artful craftsmanship and imaginative creativity that caught everyone’s eye in the first place.

“Something about Mojo really resonates with people in an intense way,” said John. His twin brother Doug agrees, “It’s fun and interesting to see the world recognizing Louisiana in pop culture, but we don’t chase after it. We do our own thing.”