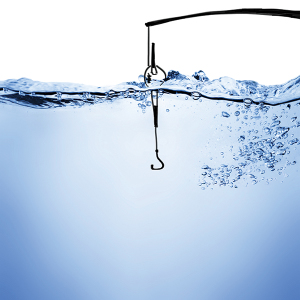 This has happened to every bass fisherperson at one time or another.  You come around the corner of a creek or you fish out on an open flat, and the sight of bass feeding on shad, blowing up the water as if it were their last meal catches your eye.  Your heart races with anticipation!  You get the boat within casting range and your first cast goes untouched.  The fish are still breaking water all around you.  The second cast, third cast and twentieth cast go unnoticed.

The minutes pass and soon you have spent more than an hour on your new found “honey hole” with nothing to show for it.  Baits litter the deck of your boat as each idea has gone down in flames.  You know the fish are there but you just can’t seem to make them bite.

The scenario I described happens quite often but under many different circumstances.  You are catching fish but they stop biting.  Do you stay and try to figure out other ways to catch them or do you go to another location?  You found an area that you and your buddy loaded the boat off of.  A week later you would think there wasn’t a fish in the lake.  Where did they go?

Bass fishing is a lot of trial and error.  Once you are able to put the pieces of the puzzle together it becomes easier.  You go from just fishing to try and locate active fish to catching fish in a matter of minutes.  However, you can also go from catching fish back to trying to locate them even faster.  Like I have said before there are no easy answers and it takes time to figure it all out.

The following are some common scenarios or situations I have seen over the years.  Each one presents its own challenges but with a little thought and patience, these potential fishing trip wreckers can turn into memorable days on the water.

COLD FRONTS
Bass fishermen have used the “the fish didn’t bite because of the cold front” forever.  In the springtime a major cold front can severely damage even the strongest of shallow water patterns.  I have seen water temperatures drop as much as 10 degrees overnight.  I have found that cold fronts in the fall and winter seasons tend to actually make the fish bite better.  Unlike in the spring when fish are needing warmer water temps to spawn, in the later parts of the year the drop in water temperature will usually trigger a feeding frenzy.  The best cold front lure ever made is the Rat L Trap.  Shad patterns in the fall and winter and red or crawfish in the spring are always good choices.  A 3/16th ounce shakey head with a 4 inch finesse worm in watermelon/red or green pumpkin is a great back up no matter the season.

TOO MANY BAIT FISH
When you find yourself in the scenario that I described earlier in this article, I have learned that even the best bass fishermen struggle.  It is hard to compete with Mother Nature.  Why would a fish try to eat something that is being used to resemble what he is naturally eating without having to use near as much energy to do so?  I have found that I do better by switching locations where I don’t have as much natural competition to compete with.  I will still stick to my shad based lure choices because I will be presenting them to fish that don’t have to pick my lures out of the crowd.

CROWDED LAKES
Four time world champion Rick Clunn who has been fishing professionally since the mid 1970’s recently said, “The biggest variable we have to contend with when it comes to finding and catching bass on our fisheries today is not the weather, its fishing pressure.  We are the number one variable.” In tournaments, when fishing summer events, I take into account the water skiers and pleasure boaters I will have to contend with.  No lure or change in line size can combat that.  All of our lakes are crowded but to be successful on the water we must adapt accordingly.   Just like heavily pressured deer during hunting season, the fish do a great job of dealing with and surviving this humanistic invasion.  My mindset on these bodies of water has always been “they go somewhere and still have to eat.”

THEY JUST WON’T BITE
I have fished many different bodies of water.  I have fished the clear waters of Table Rock Lake in Missouri to the maze like canal systems of the Atchafalaya Basin.  Seen the vast waters of Toledo Bend and Kentucky Lake and the beauty of Old Hickory Lake in Tennessee.  I have fished ditches, creeks, ponds, lakes, rivers and reservoirs.   Ladies and gentlemen, no matter the time of year, season, cold front, warm front, pre-spawn or post spawn, sometimes they simply don’t bite.

Please be careful in the woods and on the water, catch one for me and I will see you next month!